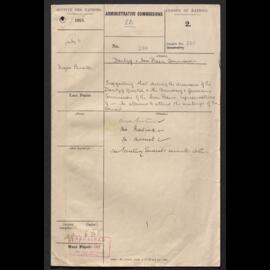 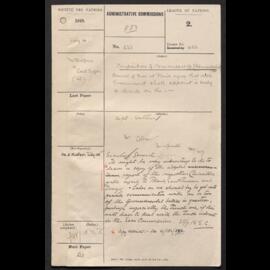 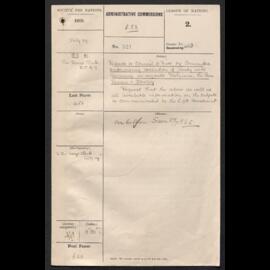 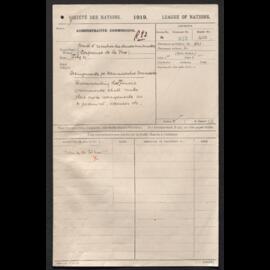 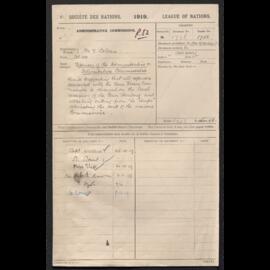 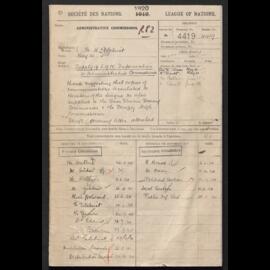 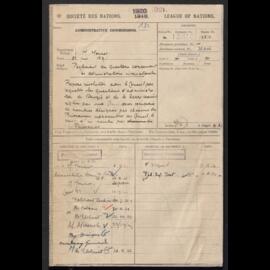 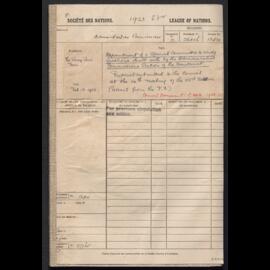 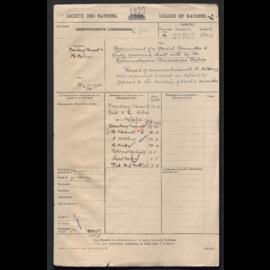 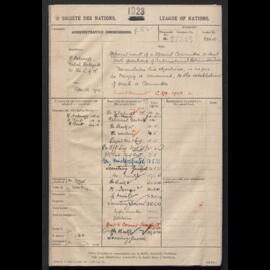 Dantzig and Saar Basin Commissions - Major Buxton - Suggesting that during the discussion of the Danzig question, the Boundary and Governing Commissions of the Saar Basin, representatives of the Danzig and the Saar Basin : be allowed to attend the meetings of the Council. Composition of Commissions (Administration) - M. Balfour to Lord Curzon - Council of Five at Paris agree that each government shall appoint a body to decide on the composition of Commissions (Administration). Reports to Council of Five by Committee supervising execution of Treaty with Germany as regards Belgium, the Saar Basin and Danzig - Sir George Clerk, K.C.M.Q - Request that the above as well as all available information on the subjects be communicated to the League of Nations Secretariat. Arrangements for Administrative Commissions - Comité d'Execution des clauses territoriales (Conférence de la Paix) - Recommending that the various governments shall make their own arrangements as to personnel, expenses, etc. Expenses of Administrative and Delimitation Commissions - Mr. E. Colban - Minute suggesting that all expenses connected with the Saar Basin Commissions be charged on the local revenues of the Saar Territory and attaching cutting from "Le Temps" estimating the cost of the various Commissions. Supply of League of Nations Information to Administrative Commissions - Mr. H. Ghilchrist - Minutes suggesting that copies of communications circulated to Members of the League be also supplied to the Saar Basin Governing Commission and the Danzig High Commissioner - Draft covering letter attached. Resolution of questions regarding the international administrations - Mr. Mounet - Propose resolution for the Council by which the administration issues of Danzig and the Saar would be solved by a Commission composed of members appointed by each of the Powers represented at the Council on the basis of one member per Power. Appointment of a Special Committee to study questions dealt with by the Administrative Commissions Section of the Secretariat - Mr. Tang Tsai Fon - Proposal submitted to the Council at the 14th meeting of the 23rd Session (Extract from the P.V.) - Council document C.203.1923.I. Appointment of a Special Committee to study questions dealt with by the Administrative Commissions Section - Secretary General and Mr. Colban - Record of conversations with Mr. Askenazy who expressed himself as definitely opposed to the creation of such a Committee. Appointment of a Special Committee to deal with questions of International Administration - Mr. Askenazy, Polish Delegate to the League of Nations - Formulates his objections, in as far as Danzig is concerned, to the establishment of such a Committee - Council document C.374.1923.I.
Results 1 to 10 of 10010 Show all

The Administrative Commissions and Minorities Section was established to apply some obligations imposed, directly or not, by the Treaty of Versailles to the League of Nations and involving administration or arbitrary activities.

In 1934, affairs related to the "Administrative Commissions" were taken over by the "Political Section".

a) Saar territory:
As stated in the 1920 Peace Treaty of Versailles, the Territory of the Saar Basin (located to the West of Germany, with its population of over 800 000) was to be placed under the administration of the League of Nations for 15 years (1920-1935). During that time, the Saar was to be isolated from the rest of Germany, and as compensation for the war destruction of coalmines in Northern France, together with what was owed by Germany as war reparations, France was given control of Saar Basin coalmines.

The administration of the Saar was entrusted to a Governing Commission consisting of five members appointed by the Council of the League of Nations: one French member, one native German inhabitant of the Saar, and three residents of countries other than France and Germany.

In agreement with the Council, the Governing Commission decided that a way must be found of taking the opinion of the inhabitants, and for that purpose it set up, in March 1922, an Advisory Council consisting of thirty representatives elected by direct, equal, universal suffrage, with the secret ballot. It also set up a Technical Committee of eight nominated members, born and resident in the territory, whose duty was to give technical advice on all matters submitted to them.

It was laid down that, at the end of 15 years of League of Nations administration (that is to say on 13 January 1935), a plebiscite should be held to enable the inhabitants of the Saar to indicate how they desired to be governed - whether they desired a continuation of the international regime, attachment to Germany, or attachment to France. Over 90 per cent of the votes cast called for the immediate reintegration of the Saar into Germany. This decision took effect on 1 March 1935.

b) Free City of Danzig:
Similarly, in the East of Germany, the League of Nations was made responsible for guaranteeing the constitution of the City of Danzig and the surrounding territory, which had been detached from Germany and made into a free State so as to enable Poland to have access to the sea, as had been promised in President Wilson's Fourteen Points.

Danzig was to be self-governing, though under the League of Nations' protection. Poland, however, was to govern the City's foreign affairs and maintain certain transit, postal and harbour rights. The League of Nations established a High Commission to oversee this district. The High Commissioner appointed by the Council was to reside in Danzig and make the final decision in cases when mutual agreement between disputants could not be reached.

2) Minorities Section:
The authors of the Peace Treaties realized that, in some countries, nationalities were intermingled to an extraordinary extent, and that the "minority" factor had been one of the main underlying causes of the great war. They endeavoured to create, through the peace settlement, a Europe more evenly balanced in the distribution of nationalities.

The League of Nations constituted itself by treaty the guardian of some obligations not embodied in the Covenant, such as the so-called "minority" obligations assumed either under the Minorities Treaties or under special Conventions, or in various Peace Treaties, or in declarations made before the Council by a number of European and Near-Eastern States (Poland, Czechoslovakia, Yugoslavia, Romania, Greece, Austria, Bulgaria, Hungary, Turkey, Finland, Albania, Lithuania, Latvia, Estonia, Iraq).

After the war, these States had to sign agreements granting religious, social and political equality to their minorities, whether or not they had been defeated. In order to supervise these agreements, the League of Nations set up the Minority Section, whose influential programmes were rather unique at that time. Its responsibilities included screening the incoming petitions, requesting responses from the accused States, forwarding cases to the ad hoc "Committee of Three", and/or investigating matters on its own. If the case appeared before the Committee, a decision had to be made as to whether or not the Council's involvement was warranted.

In 1939-1940, the Administrative Commissions and Minorities Section was merged into Department I.

The copying, reproduction, and publication of documents of the fonds to which the access is given shall be subject to the following principles: a) the United Nations is not in a position to release the researchers from any obligations in respect of copyright held by persons whose works may be found in the archives, b) the reproduction or publication of large bodies of files (whole archival groups or large series therein) shall not be permitted; c) the United Nations services shall not be obliged to carry out the actual work of reproduction, even against payment.
Researches who have made use of the LON Archives as a source for their work shall supply two copies of any resulting publication to the UN Library in Geneva. For preservation reasons, it is not allowed to photocopy original paper files nor to scan them by means of a personal scanner.