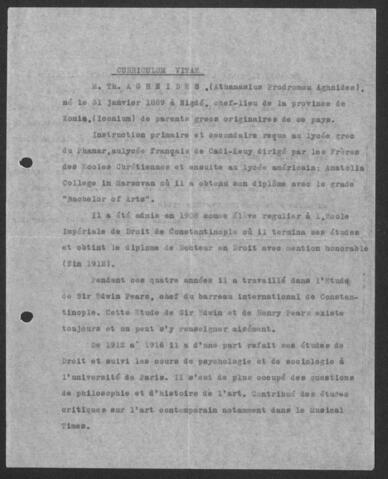 He was a Greek barrister. He was Director of the Press Bureau of the Legation of Greece in London (1917-1919). In 1919, he joigned the League of Nations Secretariat, where he worked until 1942. In august of that year he joined the Secretariat at a member of the Minorities and Administrative Commissions section (1919-1920), being in charge more particularly of the Saar and Danzig questions. In 1921 , he started the Disarmament Section and succeeded Professor Attolico (1921-1923). Transferred to the Political Section (1922-1930). He was particularly in charge of the Memel question and Secretary of the Memel Commission. In 1930, he appointed Director of the Disarmament section, assuming also the secretary ship of the preparatory Commission for the Disarmament Conference. Secretary of that Conference (February, 2nd, 1932) he participated in the longues negotiations conducted by the President Arthur Henderson. He participated in the negotiations between Adolf Hitler and Arthur Henderson. He lectured on disarmament in several countries including London. He was invited by the Turkish Government to organise the Montreux Conference on the Regime of the Straits (July, 1936) became Secretary-General of the Montreux Conference on Dardanelles. In 1937, he was invited by the Egyptian Government to organize the Capitulations Conference at Montreux. He was nominated Under Secretary-General of the League of Nations in may 1939. The same year, he organize Conference for the Suppression of in the Mediterranean. In 1942 he was Permanent Under-Secretary of State for Foreign Affairs in the Geek cabinet and from 1942 to 1947 Greek Ambassador to the Court of St James’s. He represented Greece at the San Francisco Conference in 1945 and the Preparatory commission in London in 1945 and at the General Assembly in 1946.He has been member of International Law at The Hague since 1948 and Chairman of the International Civil Service Advisory Board since 1949.

The collection contains items concerning Mr. Aghnides's career with the League of Nations, namely his activities with the Press Bureau of the Legation of Greece in London, the Minorities Section, the Disarmament Section, the Political Section (1918-1930). It includes also Aghnides' mission and activities as Director of the Disarmament Commission and as Under Secretary-General.

There are 4 black and white photos about Thanassis Aghnides, Salter James Arthur and Antoine Faroustou.

Some books are subject to copyright and may not be reproduced in their entirety.
Some photos and press clippings are fragiles and need appropriates precautions during consultation.

-There is a portrait photo of Aghnides on the site of the university of indiana about photos collection of League of Nations (see: http://www.indiana.edu/~librcsd/nt/db.cgi?db=ig&do=search_results&details=2&ID=706&ID-opt).

-There are some photos on the site of the National Portrait Gallery (see: http://www.npg.org.uk/collections/search/person/mp57151/thanassis-aghnides).