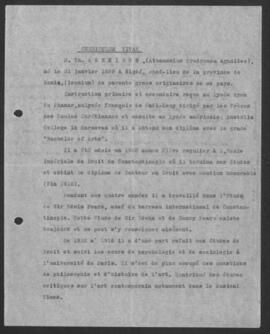 The collection contains items concerning Mr. Aghnides's career with the League of Nations, namely his activities with the Press Bureau of the Legation of Greece in London, the Minorities Section, the Disarmament Section, the Political Section (1918-1930). It includes also Aghnides' mission and activities as Director of the Disarmament Commission and as Under Secretary-General.

There are 4 black and white photos about Thanassis Aghnides, Salter James Arthur and Antoine Faroustou.

This sub-fonds consists of 52 boxes and 78 folders. There are some papers about the personnal life of Jozef Goldblat, some other about the lectures he was doing and a lot about his last books: Arms Control, A New Guide to Negotiations and Agreements. There are some IT Supports like USB Key, diskettes and CD-ROM. The archives also recovered books that belonged to Jozef Goldblat.The finding follow this organization. 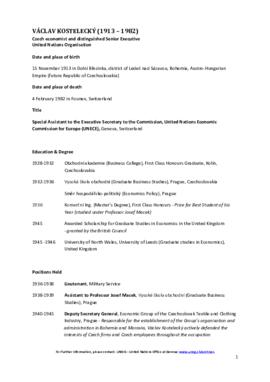 There is also correspondence between Kostelecký and Myrdal about the ECE history project, including the preparatory work for Kostelecky's book “The United Nations Economic Commission for Europe: The Beginning of a History”. This material includes records of interviews with figures prominent in the UNECE, including Gunnar Myrdal, Walt Rostow, and Evgeny Chossudovsky, among others.

There are numerous photos, four framed portaits, and several film negatives in the collection, including portraits of Kostelecky and other United Nations staff members, as well as more personal photos of the Kostelecky and Myrdal families. Primarily, however, there are photos relating to the work of the UNECE. In total, there are over 300 photographs in the collection.