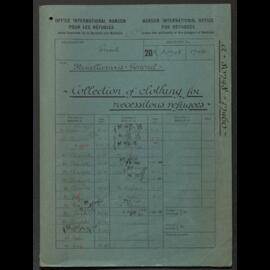 This file contains the text of the appeals in various versions made to the Advisory Committee of Private Organisations (its members with the exception of the Armenian and Russian Organisations), press cuttings and publications of organisations communicating the appeal such as the League of Red Cross Societies , correspondence and accounts for transportation of clothing.

This series represents a total of 142 titles (included, but not individually numbered: 35 duplicated copes and 7 periodical issues). Brochures, reviews, booklets, documents, maps, pamphlets and reprints that were titled in this series referred to 15 countries. They were writted in 6 languages and some have several translations. The period covered in this series ranges beetween 1917 and 1946, with the majority relating to the 1920s. Topics in this series include: laws and statutes on Mandates, System of Mandates and League of Nations , texts of Mandates, articles on question of Mandate, relationship and correspondence between administration of mandatory countries (e.g. British Empire, France and Belgium) and local communities, annual reports to the Council of the League on the situation in the mandated territories, folk art and cultural differences, laws of different peoples and world peace.

Many of these items are rare even though reprints and government documents may possibley be available elsewhere. However, this collection is very useful and interesting for researchers working on issues related to Mandates.

This series is comprised of a total of 296 titles (included, but not indvidually numbered: 28 duplicated copies and 2 periodical issues). Brochures, reviews, booklets, documents, maps, pamphlets and reprints that were titled in this series referred to 22 countries. They were written in 12 languages and some have several translations. The period covered in this series ranges between 1917 and 1946, with the majority relating to the 1910s and 1920s. Topics of the publications are peace movements and their worldwide historical development as well as the activities of peace associations and societies. They also include thoughts and opinions of various authors on the question of peace and war and on the concept of the united world and permanent peace which might be accomplished by a universally recognised code of international law or the voluntary establishment of an organization that went beyond the confines of national culture.

This series is comprised of 125 titles (including 10 duplicate copies and 40 periodical issues, which are not individually numbered), including pamphlets, reprints, bibliographical typescripts, legal texts, bulletins, review series and brochures. The publications range in date from 1909 to 1947 (with greatest coverage int he 1930s) and are written in seven different languages, some items having several translations. They deal with questions of cinematography, the main topics being film censure, educaitonal films, cinema and children, and technical questions.