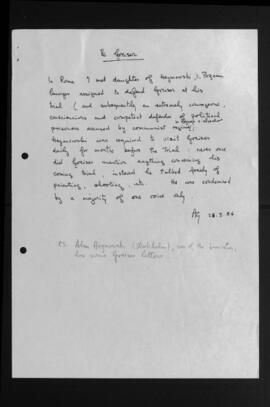 A. Gorski's Note about her Meeting with A. Heymowski's Daughter about Greiser's Trial
Document · 1986.03.23
Part of Private Archives 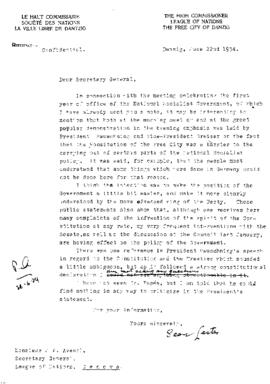 S. Lester's Letter to J. Avenol: the Constitution of the Free City of Danzig was a "Barrier" to National Socialist Policy
Document · 1934.06.22
Part of Private Archives 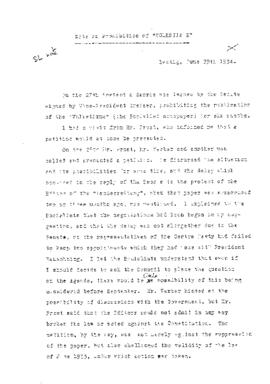 Decree from the Senate prohibiting the publication of the "Volkstimme", Socialist newspaper, for six months; petition presented by Prost and Werber not merely against the suppression of the paper, but also the validity of the law of June 1933; A. Greiser's speech saying he will muzzle the opposition press; three incidents of recent times affecting the existence of the opposition Parties: the press organs of two of them prohibited and the Communist Party abolished; President H. Rauschning informed S. Lester the suppression of the newspaper was not definitive; H. Rauschning willing to open negotiations with the Socialists; S. Lester's impression was that the suppression of the newspaper was unjustified according to the Constitution. 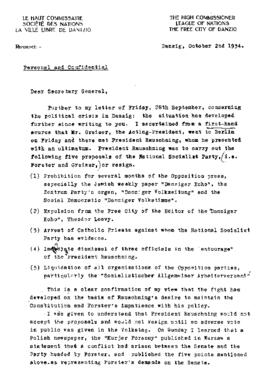 S. Lester's Letter to J. Avenol Regarding the Political Crisis in Danzig: Ultimatum from A. Greiser, Acting-President to H. Rauschning, President of the Danzig Senate
Document · 1934.10.02
Part of Private Archives

Conflict between the Senate, President H. Rauschning, and the Party headed by A. Forster; A. Greiser presented, in Berlin, an ultimatum to H. Rauschning: to carry out five proposals from the National Socialist Party (A. Forster and A. Greiser) concerning mainly the prohibition of the opposition press, and the liquidation of all organizations of the opposition parties such as the "Sozialistischer Allgemeiner Arbeiterverband", etc. or to resign, H. Rauschning neither accepted the proposals nor resigned, he was willing to maintain the Constitution; S. Lester's intervention to A. Greiser, that denied the conflict between the Senate and the Party; issuing of a new newspaper, the "Danziger Tageblatt", denounced by A. Forster's "Vorposten", because the editor was a well-known German journalist, a supporter of Stresemann, who belonged to one of the non-Nazi parties; an alliance between H. Rauschning and the Zentrum not an unlikely possibility. 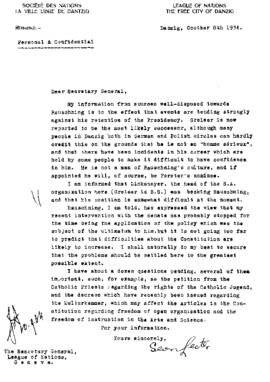 S. Lester's Letter to J. Avenol on H. Rauschning Losing, A. Greiser reported to be his Successor, and the Increasing Difficulties about the Constitution
Document · 1934.10.08
Part of Private Archives

Danzig events were against H. Rauschning's retention of the Senate presidency, A. Greiser, who was SS, was not a man of H. Rauschning's culture, incidents in his career made it difficult to have confidence in him, and if appointed he would be A. Forster's nominee; questions regarding the rights of the Catholic Youth or the Kulturkammer, etc., may affect articles in the Constitution. 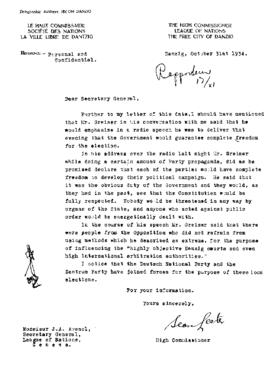 A. Greiser's radio speech: the Government would guarantee complete freedom for the elections to the Parties to develop their political campaign. 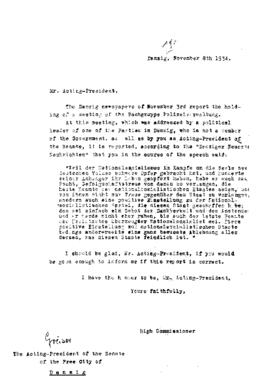 S. Lester's Letter to A. Greiser, Acting President of the Senate of the Free City of Danzig, Regarding the Police and National Socialists Relationships
Document · 1934.11.08
Part of Private Archives

S. Lester wanted to be confirmed that A. Greiser's speech as reported in the "Danziger Neueste Nachrichten" was correct. 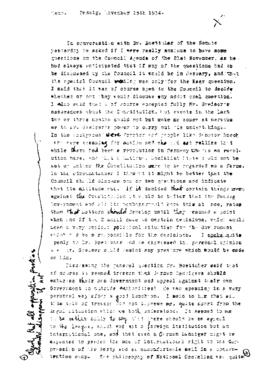 S. Lester on A. Greiser's Constitution assurances: a National Socialist State could not be set up unless the Constitution were to be regarded as a farce; Boettcher: it seemed "treason" that German Danzigers appealed against their own Government to outside authorities; for S. Lester it was rather silly not to appeal to the League of Nations, not a foreign institution but an international one and that a German Danziger be expected to prefer the use of international right to the suppression of his Party; philosophy of National Socialism: all opposition parties should disappear; if Volkstag election probably union of all the opposition parties. 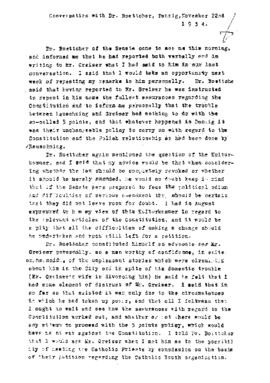 Boettcher reported to S. Lester the conversation he had with A. Greiser: trouble between H. Rauschning and A. Greiser had nothing to do with the so-called five points, question of the "Kulturkammer", A. Greiser's personality, Danzig Constitution, Catholic Priests' petition regarding the Catholic Youth organization, election results. 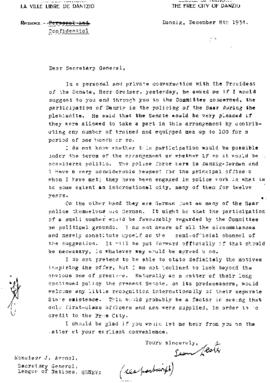 S. Lester's Letter to J. Avenol: A. Greiser on Danzig and the Saar Policing, Reference to A. Greiser's Speech to the Police
Document · 1934.12.08
Part of Private Archives

Talk between S. Lester and A. Greiser on the question of the participation of Danzig in the policing of the Saar during the plebiscite; S. Lester referred to A. Greiser's speech on the "positive attitude" he expected from the police towards the National Socialist Party.