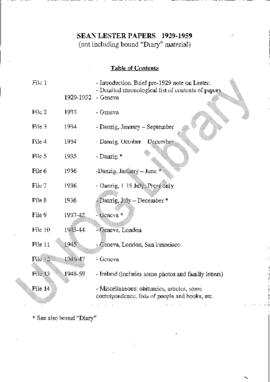 Fragmentary material. - References of documents on Irish Foreign Policy published by the Royal Irish Academy, Department of Foreign Affairs and National Archives, between 2002 and 2004 - Volumes including the texts of correspondence to and from Sean Lester - Some of the letters reproduced in these publications are not in the S. Lester's Journal and Papers, and vice-versa.

Fragmentary material.
September 1930: the Irish Free State starts a three-year term as a temporary member of the Council of the League of Nations.