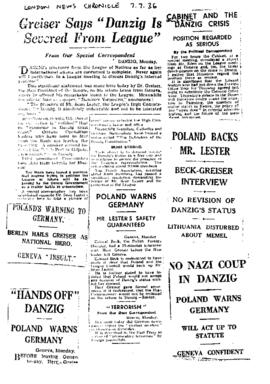 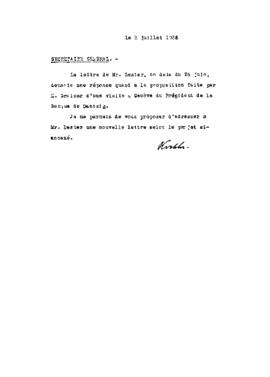 Two Letters from L. Krabbe to J. Avenol on Schäfer's Visit to Geneva and the Danzig Financial Situation
Document · 1935.07.03
Part of Private Archives

A. Greiser proposed a visit of Schäfer, President of the Bank of Danzig, to Geneva; drafts from J. Avenol to S. Lester regarding the financial situation. 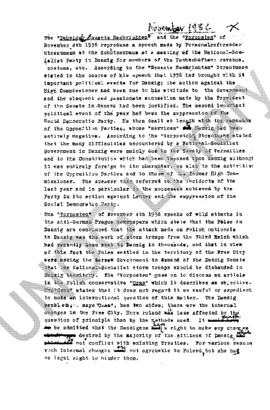 Extracts from different newspapers such as the "Danziger Neueste Nachrichten", the "Vorposten", the "Gazeta Gdanska", "Kurjer Poranny", "Polska Zbrojna" and "Naprzod", "Kurjer Warszawski", etc. on Strautmann's speech on the action against the League of Nations High Commissioner and the suppression of the Opposition Parties; attacks on Polish nationals in Danzig; attacks at Schöneberg; Gauleiter of Pomerania's and Reichsleiter Grimm's speeches; Poland and Danzig; A. Greiser that had left Danzig, etc. 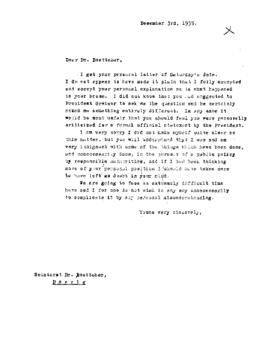 On Boettcher's personal explanation as to what happened in his house and on personal misunderstanding between Boettcher, A. Greiser and S. Lester. 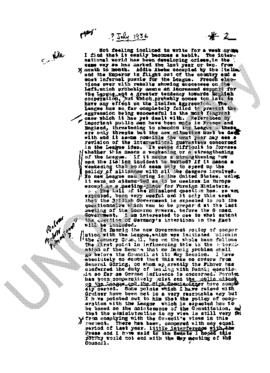 S. Lester's Personal Note on the Situation in the World and in Danzig
Document · 1936.07
Part of Private Archives

Period of crisis and great insecurity in the world; League of Nations' strengthened or weakened position; situation in Danzig with the implementation of the new Government policy of cooperation with the League of Nations; public attacks on the League of Nations and the High Commissioner ceased; fear that the Rhineland coup be repeated in Danzig; A. Greiser's view on Danzig was that it would remain a Free City, but it needed a "Deutsche Front"; war fear; Jews' situation in Poland; K. Papée on the Locarno Pact; the Danzig flag only and not the Swastika might appear on public buildings; question of the renewal of S. Lester's mandate as Danzig High Commissioner. 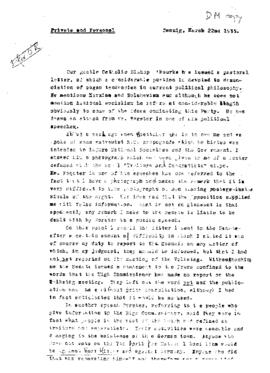 S. Lester's Notes Regarding O'Rourke's Pastoral Letter, A. Forster's Use in his Public Speeches of S. Lester's Personal Comments, S. Lester's Report on the Volkstag Meeting Denied by the Senate to the Press, A. Forster's Speech on "Traitors and Separatists", A. Greiser: Danzigers and German Community, Senators Boeck and Huth on National Socialism and "Separatists"
Document · 1935.03.22
Part of Private Archives

Catholic Bishop O'Rourke denounced pagan tendencies, Marxism and Bolshevism in politics; A. Forster's speech: people giving information to the High Commissioner were "traitors and separatists"; A. Greiser's remarks: National Socialism accepted by whole German people except some anti-German elements in Danzig protected by an out-of-date Constitution. 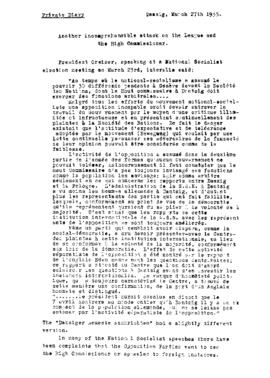 S. Lester's Notes from His Private Diary: "Another incomprehensible Attack on the League and the High Commissioner"
Document · 1935.03.27
Part of Private Archives

A. Greiser's speech at a National Socialist election meeting on 23 March 1935. 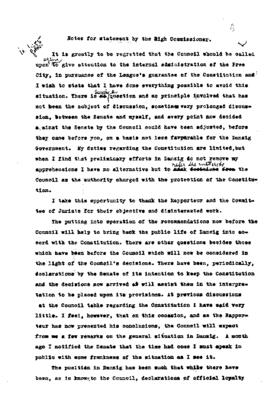 Most of the Danzig questions were subject of discussion between the Danzig Senate and S. Lester, therefore S. Lester had to refer some Danzig matters to the League of Nations Council as the authority charged with the protection of the Constitution, League of Nations Council's recommendations to bring back Danzig life into accord with the Constitution and to bring a change in the Government's policy, many declarations of open hostility to the Danzig constitutional principles, Danzig was not a National Socialist State; Danzig elections principal object was to seek to amend the Constitution, but more than 40% of the voters expressed their opposition to the National Socialist policy and their confidence in the League of Nations through the numerous petitions they addressed to the High Commissioner to protect their rights, cooperation between the Senate and the High Commissioner necessary to avoid to call upon the Council; S. Lester's appeal to A. Greiser and his colleagues of the Senate: having failed to get the necessary mandate to propose changes in the Constitution, they had to put an end to systematic actions against its principles. 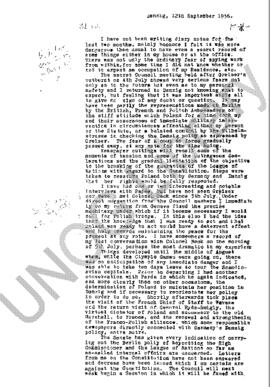 No diary notes for two months, because of the fear of spying work and the danger of having secret records of certain things; recapitulation of the events and situation since 4 July, such as the secret Council meeting, S. Lester's personal safety, the League of Nations guarantees, Polish Government's position, Berlin policy of boycotting the High Commissioner and the League of Nations, decrees against the Constitution, High Commissioner's position, "Leipzig" cruiser incident, dirtiness of the German policy, A. Greiser represented by cartoonists as a typical Nazi diplomat, Committee of Three, Spanish tragedy, J. Avenol's and F. Walters' comments on S. Lester's draft report. 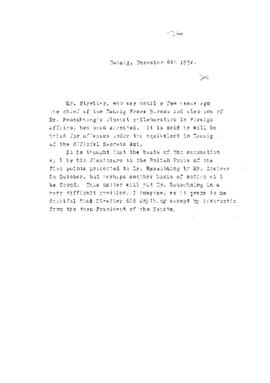 Streiter was Chief of the Danzig Press Bureau and one of H. Rauschning's closest collaborators in Foreign Affairs, the accusation seemed to be his disclosure to the Polish Press of the five points presented to H. Rauschning by A. Greiser.