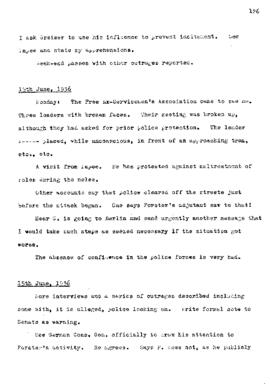 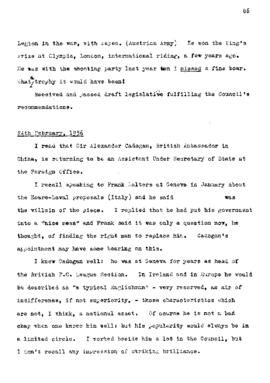 Alexander Cadogan, appointed Assistant Under Secretary of State at the Foreign Office; article by Vladimir d'Ormesson on Nazi regime and A. Hitler. 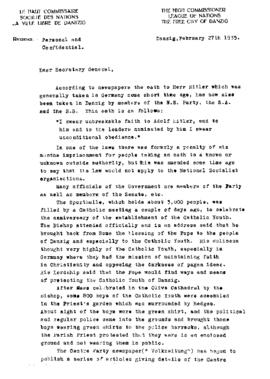 Oath to A. Hitler also taken in Danzig by members of the National Socialist Party, SA and SS; Catholic meeting to celebrate the establishment of the Catholic Youth; President A. Greiser's appeal to Danzig people to vote on the question of the Centre Party's (Zentrum) petition; "Warsaw Kurrier" on Danzig elections: Danzig status might be endangered by a victory of the National Socialists; talks between S. Lester and Senator Huth in charge of Public Works and Economics in the Senate on the Centre Party's denunciations, (Huth was candidate for the Senate presidency when H. Rauschning left); Huth's supporters included Linksmeyer (German Leader of the SA) and von Wnuck (President of the Volkstag); two warnings given to the Social Democrat newspaper "Volkstimme" by the Police President further to articles on the Harbour workers' conditions and on separatism.