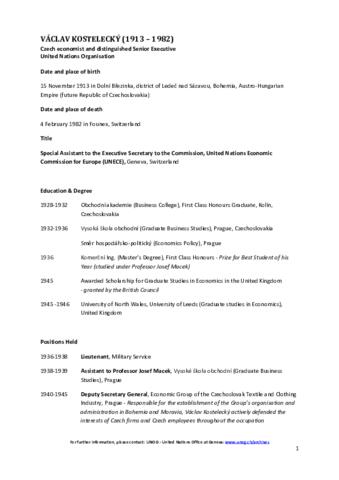 Václav Kostelecký was a Czech economist and senior executive of the United Nations Organisation, working primarily with the United Nations Economic Commission for Europe (UNECE). He devoted his professional life to all-European cooperation and to what he considered to be its ultimate criterion: the usefulness for people in their day-to-day life of the practical results obtained.

Václav Kostelecký began his career as the Assistant to Professor Josef Macek at Prague (1938-1939). During the Second World War (1940-1945), he was Deputy Secretary General of the Economic Group of the Czechoslovak Textile and Clothing Industry, at Prague. He actively defended the interests of Czechoslovak firms and employees throughout the occupation. In 1945, in recognition of his outstanding service during the occupation, he was appointed Secretary General of the group. In 1947, he became Researcher in the Social and Economic Research Institute of Czechoslovak Trade Unions.

From 1947 to 1948, Václav Kostelecký was Chief Regional Representative for Europe, United Nations Appeal for Children (UNAC), the predecessor of the United Nations Children's Fund (UNICEF). He was appointed by Aake Ording, Director of UNAC. Kostelecký successfully negotiated with countries of his region to establish National Committees and advised them on the organisation of their national campaigns until the termination of the Appeal. In 1948, he was transferred to the United Nations Economic Commission for Europe (UNECE) in Geneva (Switzerland), appointed by Gunnar Myrdal, Executive Secretary, as his Personal Assistant. Later the same year and until 1976, he became the Special Assistant to the Executive Secretary, UNECE. During his 29 years with UNECE, Václav Kostelecký had responsibilities in the fields of energy, industry and operational statistics, and for supervisory and administrative matters, supervised all external relations. He carried out many missions to Governments both with the Executive Secretaries and alone and represented UNECE at various international forums. He rose in rank from Economics Affairs Officer in 1948, through First Officer and became Director in 1969. From 1962 to 1976, he was designated Secretary to the Commission, responsible for the preparation, documentation and servicing of the annual Commission Sessions.

In 1978, Kostelecký was selected as a consultant to the United Nations for the official history of UNECE, “Three Decades of the United Nations Economic Commission for Europe” (E/ECE/962). In 1979, he became United Nations Consultant Advisor to the Director, Industry Division, UNECE. This same year, he led a United Nations seminar entitled “Practical Problems of Programme Management in International Organisations”.

In 1977, he began the research required for the “History of the United Nations Economic Commission for Europe”, working closely with Gunnar Myrdal. At the end of 1981, having assembled the major material and recorded interviews, he began the write-up. Václav Kostelecký died suddenly on 4th February 1982. The chapters he had drafted were published posthumously in 1989 under the title “The United Nations Economic Commission for Europe: The Beginning of a History”.

For more detailed biography, see the attached files attached below, available in English, French, and Czech.

Donation by the Kostelecký family

There is also correspondence between Kostelecký and Myrdal about the ECE history project, including the preparatory work for Kostelecky's book “The United Nations Economic Commission for Europe: The Beginning of a History”. This material includes records of interviews with figures prominent in the UNECE, including Gunnar Myrdal, Walt Rostow, and Evgeny Chossudovsky, among others.

There are numerous photos, four framed portaits, and several film negatives in the collection, including portraits of Kostelecky and other United Nations staff members, as well as more personal photos of the Kostelecky and Myrdal families. Primarily, however, there are photos relating to the work of the UNECE. In total, there are over 300 photographs in the collection.

Some books are subject to copyright and may not be reproduced in their entirety.
Some photos and film negatives are fragile and need appropriate precaution during consultation.

Additional materials are likely to be added to the collection.
Protection period to: 2007-12-31