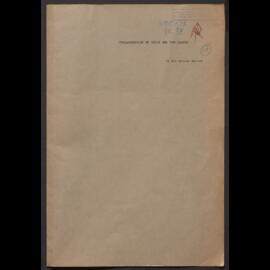 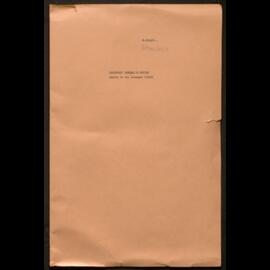 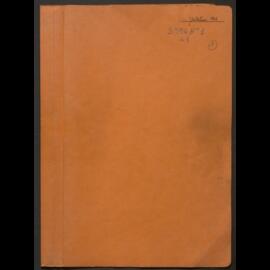 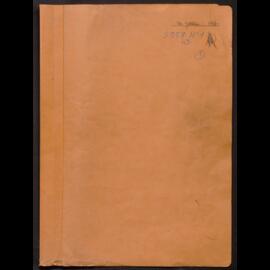 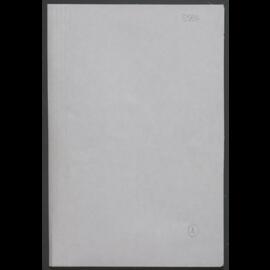 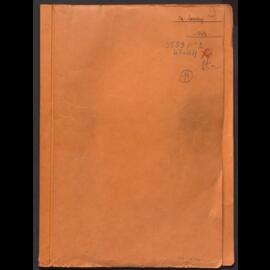 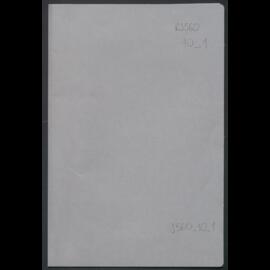 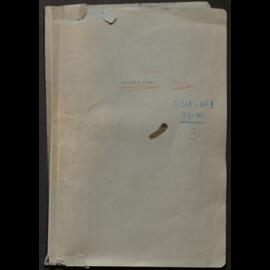 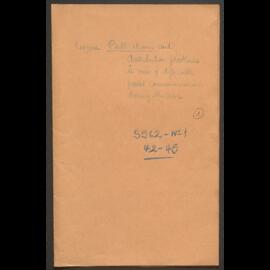 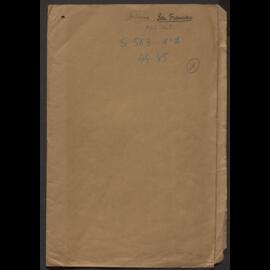 The Permanent Secretariat represented the civil service of the League of Nations and was, in practice, the only direct producer of archives. These owe their origin to actions taken by the Assembly, the Council, the various commissions, committees and specialized bodies, as well as to the work of the Secretariat. The latter was the servant of these various entities and was itself responsible for administering certain matters.

The Permanent Secretariat was the executive organ of the League of Nations in charge of:

The staff of the Secretariat:

The work of the different Sections of the Secretariat was done by international officials, who enjoyed diplomatic privileges and immunities and were expected to remain neutral towards their own governments. In 1920, the staff counted 158 civil servants and in 1931 there were 707 civil servants.

Three Secretaries-general were successively at the head of the Secretariat:

The fonds of the Secretariat:

Each department was headed by a Director.

The Secretariat was, in practice, the only direct producer of archives. This means that the latter owed their origin to action taken by the Assembly, the Council and the various commissions and committees, as well as to action taken by specialized bodies, and to the work of the Secretariat, which was the servant of these various entities and was itself responsible for administering certain matters. This is the reason why the Secretariat, which was responsible for the implementation of official acts, as well as for its own administration, produced files and kept registers.

It has to be pointed out that the Archives of the League of Nations Secretariat are the Archives of the work done by the different Sections, which composed the Secretariat and not the work of the Commissions, Committees or other organs or organizations. It is only to facilitate understanding of the complexities of the archives, that we have to provide information about these different organs, organizations, commissions, committees etc. for which the Secretariat used to work.

The correspondence and files of the various sections of the Secretariat were, in theory, handled, established and kept by a central Registry, which in fact registered, placed on file, indexed, assigned reference numbers and otherwise processed the greater part of the material. For practical reasons, however, certain sections of the Secretariat established files independently of the Registry system, either because they were authorized to function autonomously, or because they kept parallel files, for their internal use, which were often fairly different from those established in accordance with the official rules.

The Secretariat archive group was moved many times owing to changes of office premises, two of which were total: the move from London to Geneva in 1920, and the move to the Palais des Nations in 1936.

Furthermore, several parts of this group were transferred as a result of the Second World War and the establishment of the United Nations. Most of these moves were only temporary. The transfer to Nantua and then to Vichy, in 1940, lasted only a few months. The material moved to the United States during or after the war has now been almost totally recuperated. The Registry files (the corresponding section files have been destroyed) of the Health Section of the League of Nations, which were handed over to WHO in 1954, have been returned to the United Nations by that organization.

Finally, it should be noted that whereas certain records constituted in the Secretariat of the League of Nations (such as those relating to the buildings and what is left of the audio-visual documentation) have remained in the active units of the United Nations Office in Geneva or at the Organization's Headquarters in New York, parts of the Secretariat archive group were destroyed at different times. In some cases this was done as a matter of administrative convenience (both before and after the war), and concerned papers deemed to be of no interest. On other occasions destruction was the consequence of the wartime situation (e.g. destruction of certain files and of the Drummond papers in 1940. The Drummond papers (7 or 8 cartons in all) were "not particularly personal" and related mainly to the initial period of the League of Nations).

However, in spite of these relatively few destructions, about 90 per cent of the Secretariat archive group has remained in its original state, with scarcely any confusion. The only relatively serious losses are those of certain later Section files and of the papers of the first two Secretaries-general, Drummond and Avenol, and even here it should be noted that the Avenol papers exist elsewhere (Avenol's papers were given to the Quai d'Orsay by the executors of his will).

In the early days of the League of Nations, even before its official existence had begun, a "registry" was set up in the Secretariat, following the practice of the British Civil Service, or rather of the Foreign Office as it functioned at that time. This unit was responsible for registering correspondence and for opening files, placing material in them and classifying and indexing them. This Registry, embryonic in form to begin with, served the Secretariat as a whole. Since files were only opened as and when the need arose and were arranged in the order in which they were opened, it became necessary, in order to avoid confusion, to establish in the Registry, early in the summer of 1919, a register of classification sections and even to number those sections.

Thus if it was necessary to give a certain structure to the Secretariat, it was not easy to define the kind of organization it really needed. Lists of Secretariat sections and even organizational charts were drawn up by Drummond and his staff as early as 1919, after which actual sections were established and their first heads appointed; but those were only provisional arrangements, which needed certain adjustments. It seems that classification sections were created only as and when the need arose. This is the reason why some of these sections later fell into disuse and there was also a certain amount of reclassification. Some sections of the Secretariat, for example, which were set up to deal with labour, women's rights, education, etc., found themselves without any practical objectives, while, as time passed, certain activities that had developed or had not originally been foreseen, made it necessary to create sections which had not been thought of in the first place. Thus it was decided, in order to facilitate the classification system, to provide the divisions established with numbers and titles.

The Registry of the League of Nations was reorganized in 1928 and 1933, this is the reason why we have three chronological series 1919-1927, 1928-1932, and 1933-1946. One of the reasons for the reorganization was the fact that the classification sections of the Registry did not properly correspond to the administrative sections of the Secretariat. This difference was, in some measure, the cause of the formation within the Secretariat of small parallel archives, known as "Section files".

The Secretariat archive group is, therefore, constituted of two categories of files: the Registry files and the Section files.

The Registry files consist of documents received or produced by the various sections or other administrative units of the Secretariat, but dealt with by the Registry in accordance with official rules.

Initially, the whole system was based on the "document" concept. This particular meaning of the term "document" must not be confused with another special meaning, that of the "documents" of the League of Nations. The word "document" is used, both in French and English, in a very special sense: the "document" was then the basic unit, the small sub-file created by the receipt in the Secretariat of any written paper, to which were then attached items of correspondence, relevant observations ("minutes") and any available reports on the question. It was the registering of the original item which gave rise to the opening of a special jacket and the assignment of a Registry "document" reference number. This procedure was relatively simple: in the main entry book, where the numbers followed each other from one to infinity, the item constituting the essential matter of the "document" was briefly analysed and received a number.

The Registry files of the League of Nations Secretariat always fall within one, and one only, of the three chronological series (1919-1927, 1928-1932 and 1933-1946). Dates seldom overlap. Furthermore, each file bears on it the reference numbers of any files in the other series which may have followed or preceded it.

The physical filing was done according to classification sections and, within them, by dossiers.

The Section files form an integral part of the Secretariat archive group. They represent a mass of non-Registry documents of which the substance, the internal classification, etc., are different for each section of the Secretariat responsible for producing them.

Being spontaneous creations which developed freely, the Section files, unlike the Registry files, have no true official history. It was thought that the central Registry represented an ideal instrument. In fact, the heads and members of section of the League of Nations Secretariat tended to find themselves hampered by the fact that their working files were kept by the Registry. Moreover, far from finding themselves better integrated by a strengthened Registry, the sections more or less consciously defended their individuality by developing their own parallel archives, the Section files, which proliferated more than ever.

In several sections, however, there was also a literal application of the principle laid down by Drummond ("The Registry is the single legitimate home for all the official archives and registered papers"); but others, playing on words, concluded that besides "registered papers" and "official archives", there could be papers which had not been registered and archives that were unofficial. The concept of "private papers" (a term which should not be translated into French as "papiers privés") was used in that connexion, and some sections kept their own files (sometimes, as in the case of the Economic and Financial Section, they even had their own registry), often to the detriment of their official files. Moreover, some sections and services contrived to secure recognition of their autonomy.

Among these Section files are, for instance, the "private papers" of heads or even ordinary members of a section (memoranda, confidential papers, duplicates of correspondence handled by the Registry), basic documents of which only a synopsis was registered (material for reports, replies to questionnaires, drafts of mimeographed documents), chronological series of correspondence which has not been classified according to subject, etc. Depending on the case and the point of view, Section files can be either more, or less, interesting than the Registry files; sometimes they duplicate the latter; sometimes they supplement them. The Section files sometimes have their own indexes, but the official Registry indexes never refer to them. These files constitute records which are naturally less orderly and less complete; but the manner in which they were built up, which was purely functional, has the advantage of linking them very closely with the Secretariat Sections concerned, and thus with decision-making.

If the Section files are sometimes in disorder or incomplete, the worst, however, is the elimination of some files, because the Sections were left virtually free to sort and keep their own files. Moreover, because of the move in 1936, and the 1940 crisis, irreparable destruction was carried out. We therefore no longer have any Section files for the Political Section after 1933, except those relating to the "Administrative Commissions". Similarly, the section files of the Health Section were almost entirely destroyed in 1955.

The Section files were numbered in accordance with the methods of the secretaries or heads of Sections. But this numerical classification system appeared obsolete and it was, then, decided to give the Section files new reference numbers.