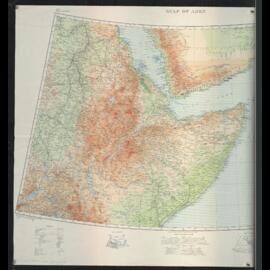 Include index to adjoining sheets and index to boundaries. 3 copies of same map. Annotation on page 4 indicates map given by Sir George Maxwell to the Advisory Commission of Experts on Slavery on 10 April 1935, as an annex to his statement reproduced in the minutes(12th meeting).

This series is comprised of 84 titles (including 5 duplicate copies which are not individually numbered) and contains pamphlets, reprints, documents, newspaper articles, books, typescripts, memoranda, leagal texts and brochures. The publications range in date from 1906 to 1948(with greatest coverage from the mid-1920's to the mid-1930's) and are written in five different languages, some items having several translations. They deal with quesitons of slavery, the main topics being anti-slavery campaignes and information about slavery and similar forms of exploitation.